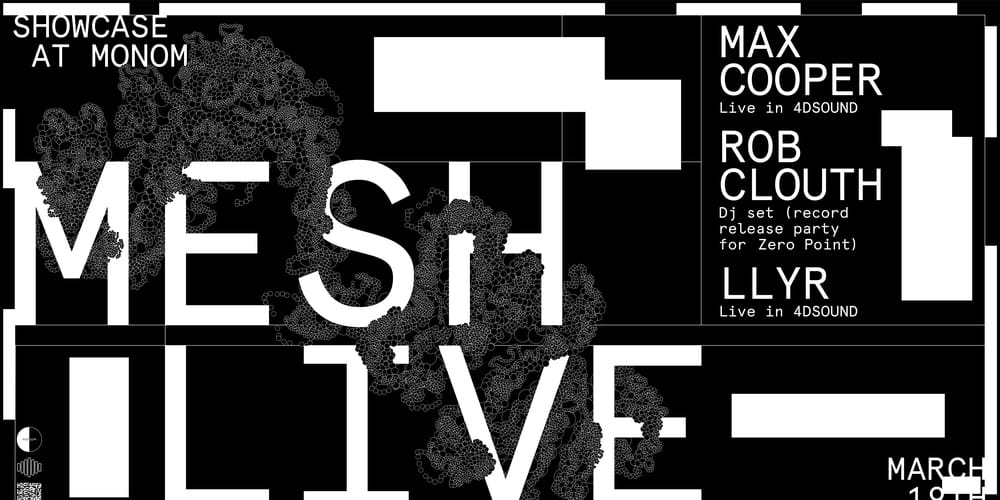 On March 19th MONOM welcomes back 4DSOUND veteran Max Cooper along with label affiliates Rob Clouth and Llyr for a Mesh showcase. Across this unique event, the artists will perform live on the world's leading spatial sound system built by 4DSOUND. The night will continue with DJ sets by Max Cooper and friends.

The event was curated to celebrate the release of Zero Point, the forthcoming debut album by Rob Clouth due out on Mesh, March 12th. Llyr also wants to be showcasing some new sounds that will form part of an LP due out later this year on Mesh. This is all followed by MESH Label founder, Max Cooper

MESH is Max Cooper's acclaimed record label, founded to explore the intersection of music, art and science. Fostering an ongoing commitment to innovation and tech development, MESH invites artists from London, Berlin and Barcelona to interrogate the boundaries of how we experience music in one of the world's most advanced sonic environments.

First encountering the 4DSOUND approach in 2013, Max will, for the second time, compose a piece especially for MONOM. Few artists have been as successful in furthering the conversation around music, visual art, tech and science in the past ten years. Working with close collaborators and institutions alike, he has honed in on a mixed-media approach to the arts, spanning immersive installations, groundbreaking sonic treatments and club-ready releases to critical acclaim. Using technological advancements with a firm eye on the future and a humble acknowledgment of that which came before, Max's approach to his craft is one that utilizes technology in the most human way possible.

Rob Clouth is a long-term MESH affiliate whose debut album Zero Point explores the chance and chaos of quantum mechanics to forge a love letter to noise, written with data sampled from the core of the universe. Exploiting his skills as a software developer, Clouth created a suite of tools - including his own synth - that tap into data from the ANU Quantum Random Number Server (QRNS), an online service that publishes real-time measurements from the zero-point energy field. The result is an inspiring and affective document of the small miracles that surround us.

Making his debut in 4DSOUND, Llyr is a Berlin-based artist who previously performed a surround sound show at the afterparty for Max Cooper's sold-out Barbican show in London, and will soon be releasing music on MESH.