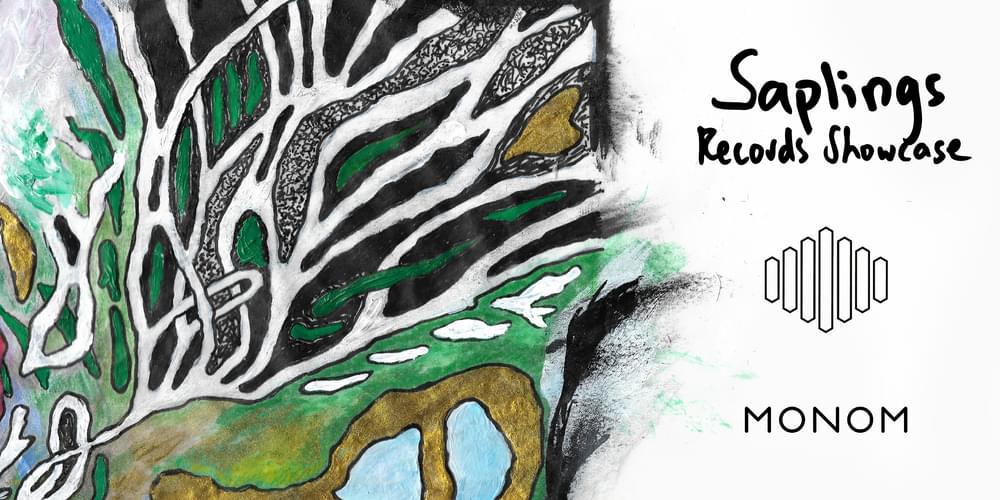 MONOM presents Saplings Records’ first-ever showcase in the Northern Hemisphere. Founded by Fis (Oli Peryman) in 2017, Saplings has pioneered a bio-digital release format whereby sales of digital music translate to ecosystem restoration. In partnership with Eden Reforestation Projects, Saplings has funded over 14’000 trees since its inception.

The showcase celebrates two full-length releases due out on Saplings on October 3rd:

Both works will be explored in 4DSOUND, the world’s most advanced spatial sound instrument. VASE draws upon a unique sound palette discovered as an artist in residence earlier this year in Rotterdam’s Waveform Research Lab at WORM Studios. Renick and Fis will continue their live performance research project Emergence, which improvises with generative systems, digital processing, and analog synthesis, to find new territory with 4D’s unrivalled spatial expression.

Joining the line-up is Saplings’ guardian angel and MONOM regular, PYUR - who’s in celebration mode herself with a second album due out the same night on Subtext Recordings. Her DJ set closes the night after a solo hoedown by Fis on MONOM’s weighty new quadraphonic sound system.

In the Saplings spirit, a venue royalty will be offered to the Earth, recognizing it as the broader venue for the showcase and indeed all planetary concerts. To this end a budgetary allocation for 1,000 trees has been agreed between MONOM and the artists.  Oh and be sure to arrive early for complimentary supper !

VASE (Jorge Camacho) joins the Saplings roster amidst a burgeoning catalog with releases on Opal Tapes and Berlin’s Index:Records. A recent residency at Rotterdam’s Waveform Research Lab (WORM) was a watershed moment for VASE. His latest full-length Lock Phase Variations draws mostly from this residency, featuring unique textures and rhythms discovered through lock generation, phase detection, and spectrum shaping. When calibrated correctly, this signal-path allowed Jorge to ‘zoom in’ on a modulated frequency, encountering ever-evolving micro-rhythms and rhythmic phasing.

Jorge generously gifts this work to Saplings - making it a revenue stream for ecosystem restoration. The record is due out October 3rd and each sale will fund a minimum of 80 trees with Eden Reforestation Projects.

Fis and Renick Bell’s collaboration started in 2017 with a commissioned performance for Berlin Atonal. Since then the pair have embarked on a performance and recording research project called Emergence. Exploring Renick’s expertise in generative techniques and Fis’ sound design and live signal processing, this project will be documented periodically on Saplings beginning with Emergence Vol. 1 on October 3rd. The 18 track volume is a cross-section of palettes and techniques explored over four separate recording sessions since 2017. Also released biodigitally, Emergence Vol. 1 will fund a minimum of 100 trees per sale.

PYUR, Sophie Schnell, is a Bavarian artist and composer working in film, photography, dance and illustration.

In 2016 Schnell released her first LP, the full-length audiovisual album Epoch Sinus on Hotflush Recordings. Shortly after its release, PYUR performed on Stockhausen’s Oktophonie for Berlin Atonal, which was followed by commission by the Deutsches Symphonie-Orchester performed at the Parallax festival and done in collaboration with PAN's Valerio Tricoli. She was also invited to create a work for the grand opening performance for MONOM, the new centre for spatial sound at Berlin’s Funkhaus, as well as to open for Autechre at MacQuarie Wharf in Tasmania during the Dark Mofo Festival.

PYUR’s second LP, Oratorio For The Underworld, is due on October 10th on Subtext Recordings.